Why I am asking for a refund from the ind.ie project

Today I asked for a refund from the ind.ie project for the donation I'd made to them last November. For those of you unfamiliar with ind.ie it is a project and team headed by Aral Balkan that has as its goal the promotion and development of independently funded (i.e. non-Venture Capitalist-backed) technology and products that respect and protect your privacy and let you own and control your data (see their manifesto). This is in contrast to companies like Google and Facebook who mine and manipulate your data, share it with Governments, don't respect your privacy and moreover, own the rights to the data you give them.

Most people use Google and Facebook because they're convenient, established and benefit from network effects. But everybody wants to maintain their privacy and everybody would love to have more of a say over how their data is used. Privacy is a fundamental human right and is a necessary prerequisite for democracy. Any product which protects a person's privacy is always going to be welcomed.

Indie launched last November on the back of Aral's talk regarding the Camera Panopticon, or basically how you're being spied on online and how you essentially have no privacy. The latest iteration of his talk is called You Are The Product and I highly recommend you watch it if you haven't already - he does a good job of laying out what's wrong today, what the implications are for the future if we stay on the same course, and finally, how we can change things for the better.

As Aral astutely points out, although there are existing products out there which respect your privacy and autonomy they're not user-friendly for most non-technical users. Thus the solution is to build products which give you the same privacy guarantees but through "gorgeously designed" interfaces.

The pitch given for Indie's crowd-fundraiser was that they would build a new social network - Heartbeat - and operating system - Indie OS - and cloud - Indie cloud - and combine the three with a new phone and excellent design throughout the stack to give you a compelling reason to switch and thus reclaim your privacy. An audacious task indeed, with the phone launch date set to be the end of 2016. As Aral pointed out he didn't believe their backers (i.e. donors) would be willing to wait much longer than that for the end result. I think that was a wise assumption to make and it gave me confidence that Indie would really get on the case once fundraising was over and that I'd be using Heartbeat from December 10th onwards, the promised pre-alpha date.

Given the tight schedule I assumed that they'd already been building their product for a while - otherwise how would they be able to release it so soon? In fact, Aral was already involved in building the Indie phone as far back as November 2013. All in all I was very happy to donate towards their fundraiser. The software developed would be open source (yay) so I was also looking forward to contributing what I could in terms of bug fixes and pull requests. End-to-end encryption combined with a distributed topology - what more could I ask for in terms of a cool project to work on!

Once the fundraiser ended it turned out that Heartbeat - the much promised social network - had yet to be built. Then the pre-alpha release date got pushed back to early January 2015 and with that came a new Roadmap (still the same as of today): 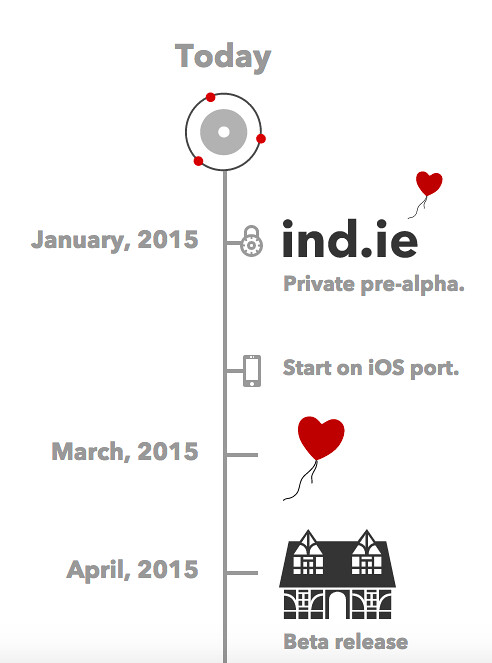 But then the release got pushed till later in January. Then a few weeks into February we were told it would be out in May, to give time for things to be properly built and tested. After all, first impressions are everything and we don't want to rush things, do we? Meanwhile, as of writing this the source code for Heartbeat is still not available on Indie's Gitlab. I asked Aral about this:

@aral Will Heartbeat be available on your Gitlab for pre-alpha launch?

His response was that it wouldn't be available until after the pre-Alpha is released:

@hiddentao Hi Ramesh, most likely after the pre-alpha. Goal of pre-alpha is to quickly iterate on the experience.

I don't get why. Moreover, until the pre-Alpha is released there's nothing that any interested developers can do to contribute to it. This doesn't sound open and inclusive to me. Aren't those part of Indie's values?

Of course, there's Pulse, the tool which will be responsible for syncing data between users. Originally split from Syncthing, Indie appear to be rewriting it into Swift, presumably for better integration with Hearbeat. But that's not yet ready. Moreover, the last update to Pulse itself was months ago.

Then there's their Phoenix project, a free and open source implementation of Apple's new-ish Swift language. They launched this with a bang (and biting criticism) and now it appears to have stalled - the last update was months ago.

Maybe I'm wrong. Maybe considerable effort is being put into both of these projects behind the scenes. But then again, I thought Indie was meant to be about openness and inclusion.

Thinking about it, is it really necessary for us to have an open source implementation of Swift right now? The only technical reason I can think of is that Indie wishes to write code in Swift and then compile for multiple platforms. But the new compiler isn't ready and doesn't look it will be anytime soon. Furthermore, back in January Indie decided to limit launch platforms to OS X and iOS due to the need to "focus" their limited resources. So it turns out we don't need an open source Swift implementation right now after all.

It seems like effort is being thrown in different directions without much fruit to show for it. Meanwhile, we still have no Heartbeat to use and the source code is still not public.

Throughout this time, Aral has and still is giving plenty of talks about the fundamental issues and Indie. I'm all for that - we need to raise awareness around these issues. But we still need to build the product. And we need to do it in an open manner and with an inclusive attitude, otherwise people lose trust, lose confidence in what you're doing, and ultimately lose interest - the point at which I'm currently at.

Over the past week Indie have announced their intention to leave the UK and move elsewhere due to the re-election of the Conservatives. One of the points raised is that the Government may pass a law mandating "backdoors" in encryption products. This is a real concern for anyone building end-to-end encryption products. But I really don't think the Government will be able to ban encryption and/or mandate backdoors because these policies aren't workable (never mind that they make you less secure). In any case the government already has the ability to force you to disclose your passwords and encryption keys.

To me this desire to up sticks and leave the UK comes across as being a bit melodramatic. And of course, nobody in the UK government or the wider London startup community is going to care what Indie does or doesn't do because Indie isn't yet on the map in terms of having a successful product that's being used by lots of people. Perhaps moving elsewhere will turn out to be a boon and things will start going really smoothly. But I don't feel as confident about Indie now as when I first donated. So I'm not sure about that.

And by the way, does this mean Hearbeat is going to be delayed yet again now that you all have to move country? Barring a response from Aral asserting otherwise, most likely.

I could wait. Maybe Heartbeat will really be awesome and the wait will have been worth it. But how can they possibly get a phone ready before 2017 with their small team? Especially if they plan to design and build the hardware and operating system from scratch? And if they want to get a bigger team they'll need to fund-raise again, which means less time for development. I don't think it's going to happen. And I don't want to wait to find out what will happen.

In the end I just feel disappointed. And perhaps I didn't need to write this long a blog post about this....maybe I'm being a bit melodramatic about all of this. Maybe I was foolish to believe in Indie in the first place. Or maybe, as Aral would say, I'm just a "Dumb Fuck".

By the way, for anyone else who wants to get a refund just email hello@ind.ie

If anyone wants a refund on their donation because we have dropped Android from our roadmap, pls contact hello@ind.ie & youâ€™ll get it asap.